A great local event is the World Stone Skimming contest on Easdale island, this year its on Sunday 23 September 2018, with a restriction on 350 entrants. 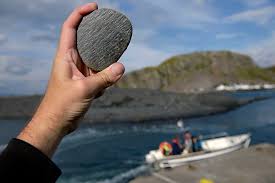 The event was started in 1983 and resurrected in 1997. Contestants hail from around the world and the championships now attract over 300 participants and many spectators. Anyone of any age and any level of skill can enter.

Official Rules of the World Stone Skimming Championships are: